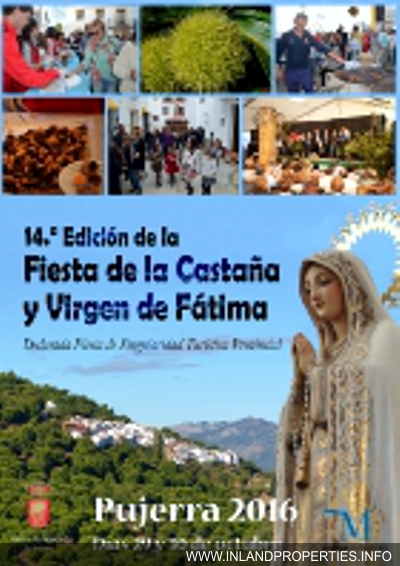 What : Chesnut Festival in Pujerra, Málaga

The arrival of autumn is the date on which the celebrations related to the chesnut take place. Every year in late October or early November it is celebrated in Pujerra, located in the Serrania de Ronda. The Chestnut Festival, which coincides with the day of the patron saint of the town, the Virgin of Fatima.

Normally, the holiday is usually done when the collection of the Chesnut is finished.

During this holiday you can enjoy music and dancing in the streets of the town, as well as tasting more than 50 dishes made with chestnuts and accompanied by anise or brandy. In addition, you can visit many places where clothes and typical tools in collecting the fruit are shown.

10:00 Launch rockets announcing the start of the 14th CHESTNUT FESTIVAL AND VIRGIN OF FATIMA 2016.

11:00 Diana and Parade, with the performance of the verdiales OF PARAUTA.

17:30 gastronomic tasting of products made with chestnuts in the Plaza de la Iglesia.

20:00 MEMORIAL to the Association of Friends of Cadiz by its X Collaboration and Promotion of the Chestnut Festival.

11:30 Celebration of Holy Mass in honor of Our Lady of Fatima, patroness of Pujerra.

12:00 PROCESSION in honor of our Patron, accompanied by the Band of Pujerra.

16:00 Afternoon open at the Chestnut Museum.

HISTORY AND PROPERTY IN PUJERRA AREA